A Fake Railways Notification has been circulated on social media stating that RRB NTPC 2019 Vacancies have been decreased by 70%. Candidates are advised not to fall prey to such fake notifications. Check details of RRB NTPC Fake Notification here.

Recently, a fake notification has been being circulated on social media which states that Railways have decreased the total number of RRB NTPC 2019 Vacancies from 35277 to 10648. However, this notice was confirmed as a fake by the Railway Officials. It has been discovered that someone has tampered the official notification released by railways on 14th October 2019. The official notification stated that the RRB NTPC 2019 1st Stage Computer Based Test (CBT) has been postponed which was earlier scheduled to be held between the months of June and September 2019. Later, on 15th October, a fake notification was circulated in social media that RRB NTPC 2019 Vacancies have been decreased from 35277 vacancies to 10648 Vacancies. Let’s look at the RRB NTPC Fake Notification and Official Notification separately one-by-one.

Here is the snapshot of the fake notification which was circulated on 15th October 2019 on social media: 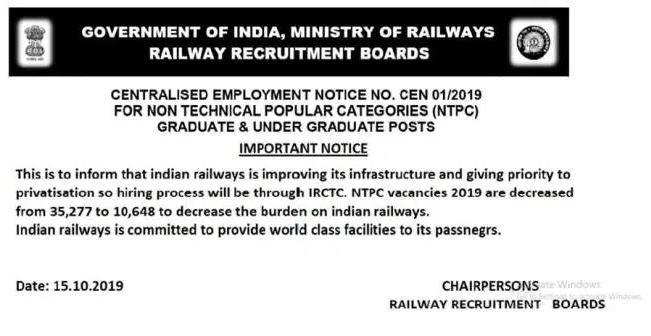 The above image was circulated on lots of whatsapp group and is getting viral over other social media sites as well. The above notification is clearly a fake one, as the total number of RRB NTPC Vacancies was earlier revised from 35277 to 35208 Vacancies. Also, the reason stated in the notification that to reduce the burden on Indian Railways the vacancies have been decreased is totally a fake. As per the sources, the South Western Railway officials have also clarified that this notice is fake.

Get Latest Updates on RRB NTPC 2019 Exam and Admit card

Let’s look at some other important information related to RRB NTPC 2019 Exam:

RRB NTPC 2019 recruitment can be a good opportunity for the candidates who want a government job in Indian Railways. RRB NTPC Job Profiles can offer you a decent salary along with respectable government job having various benefits and perquisites.

RRB Calculator for Normalization of Marks in NTPC 2019 Exam