Brain Teaser Picture Puzzle: Can you spot the giraffe with no twin within 25 seconds?

Brain Teaser Picture Puzzle: In this fun quiz, try to spot the giraffe with no twin in the picture. Can you solve this puzzle in 25 Seconds?

Can you spot the giraffe with no twin within 25 seconds? This brain riddle is for those who enjoy playing fun games and puzzles. Brain teasers make a simple riddle or a puzzle more interesting, as these brain games are solved with creative thinking. While solving these riddles, you need to analyze the problem a little differently and out of the box. For coming on to the solution, you need to use a creative mind as the answer won’t be right in front of you. So, we have come up with an interesting brain teaser where you have to spot the giraffe with no twin in the picture.

Can you spot the giraffe with no twin in 25 seconds? 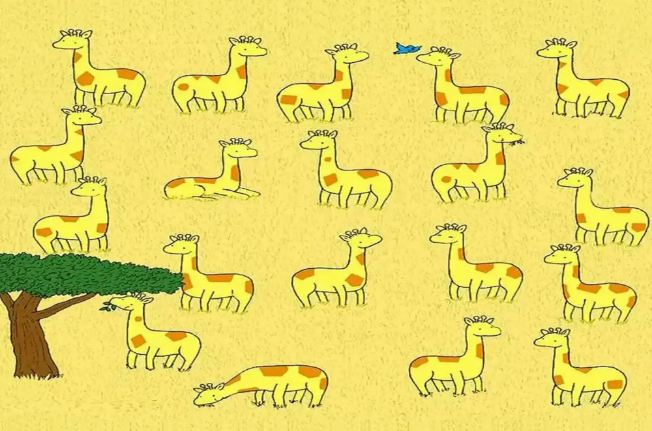 In the above image, you can see that there are 19 Giraffes in the forest. One of these giraffes does not have an identical twin. You are required to look at the image carefully before answering the question as the answer is quite simple but tricky. As a heads up, the answers to this brain teaser have been given right below the question, so make sure you don’t scroll too far and cheat!

In this picture puzzle, viewers will be going on a safari to find the one giraffe that doesn’t have a pair. At first, you won't be able to notice the odd Giraffe without its twin in the forest. But after a few seconds, you might be able to spot the odd animal by closely examining each giraffe’s eyes, markings, and stature. If you're still struggling then take a look at the third row and one from the right in the image. 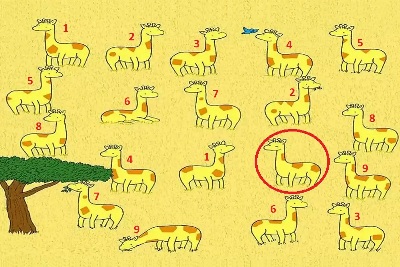 You can see in the above image that there are 9 pairs of Identical Giraffes in the forest. Only one (marked in a circle) doesn’t have its twin.

Some puzzles don't necessarily require mathematics skills or lateral thinking but are a simple test of your observation skills. This riddle was tricky but simple as it needs less time and brain power to solve. But it sure feels great when you figure out the answer in a few seconds.