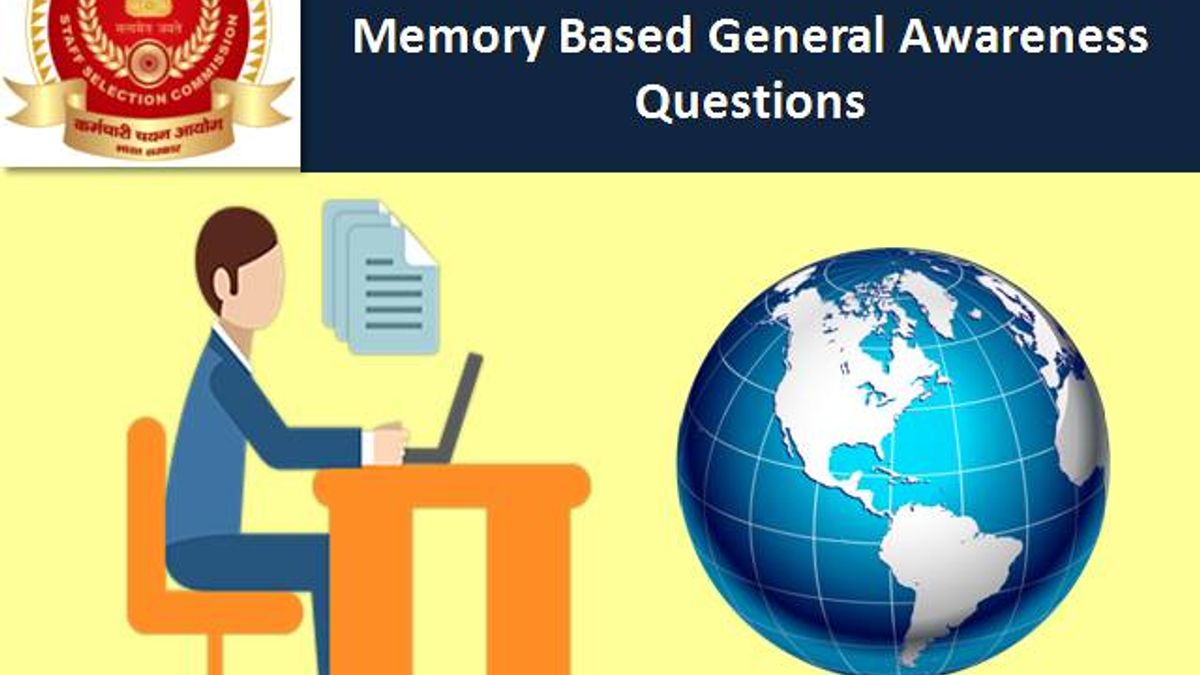 SSC has commenced conducting CHSL Tier-1 2018-19 CBE Exam from 1st July and will last till 26th July 2019. In this article we are going to share the important memory based Questions as per the feedback received by the candidates who have appeared for SSC CHSL Tier-1 2018-19 Exam. Candidates are advised to definitely cover these questions for scoring high marks in the Exam.

Let’s have a look at the Important Questions that are being covered in the SSC CHSL Tier-1 2018-19 Exam:

1. Which is not a water borne disease

2. Which country ranked no. 1 in Global Peace Index?

3. Kolleru Lake is in which state?

4. Uttar Pradesh share boundary with how many State /UT?

8. Article 123 of Indian Constitution is related to:

Ans: Grants the President certain law-making powers to promulgate ordinances when either of the two Houses of Parliament is not in session

10. Barabar Caves belongs to which dynasty?

12. Tennis Player Rafael Nadal is from which country?

Ans: Playing It My Way

17. Who scored century in his Cricket Test Debut Match:

18. 14th chairman of finance commissioner who is an ex governor of RBI?

19. President hand over the resignation letter to:

20. Which organisation has been banned in May 2019 by India?

22. Hazaribagh is part of which State?

23. Battle of Pratapgarh was fought in:

5. Padma river in Bangladesh is the tributary of which Indian River?

6. Committee who submitted report to RBI on increasing digital payments:

7. Valley of flowers is located in:

9. Who is the BCCI Ethics Officer (Ombudsman)?

10. Smriti Irani is the cabinet minister for:

11. New airport in Gujrat will be built in which city?

Ans: Rajkot Greenfield International Airport is a greenfield airport to be built at Hirasar, Gujarat

12. When was Revenue Act passed?

13. What is PaaS in Cloud computing?

Ans: Platform as a Service

15. Systolic and diastolic are related to:

16. In which game TRIPLES is introduced recently:

22. Which is the highest award in armed forces?

24. Who fought against Maharana Pratap in the Battle of Haldighati?

2. Who wrote the book Kamayani?

3. Who was the first emperor of syed dynasty?

4. Narendra Modi Movie was directed by:

5. Who is MSME minister?

16. Who was the Captain of Asian Women Indian Kabaddi Team?

17. Joint process of vaporisation and condensation is called:

21. The Industrial Development Bank of India (IDBI) was set up in:

24. Headquarter of Union Bank of India is located in:

25. Which State banned e-cigaratte in India?

27. Panchavati is situated in which State?

32. Google was incorporated in:

2. Where did Gautama Buddha was born?

7. Sai Parneet is related to which of the following Sport?

9. Third Battle of Panipat took place in the year:

10. Who is the First Lokpal of India?

11. How many total seats are there in Rajya Sabha?

Ans: The Lokpal and Lokayuktas Act, 2013, commonly known as The Lokpal Act,

14. Headquarter of WHO situated in:

15. Who is the railway Minister?

20. Who won the first ever silver medal in Rio Olympics for India?

Ans: P.V. Sindhu became the first ever Indian woman to win the Silver medal at the Olympics

21. What is the chemical name of salt?

24. National day of voters observed on

26. Finance commission comes under which of the article of Indian constitution

27. Who is the first chairman of Finance commission

29. Koldam project is built on which river?

Ans: The Bhoodan Movement or Land Gift Movement was a voluntary land reform movement in India, started by Acharya Vinoba Bhave in 1951 at Pochampally village which is now in Telangana, India, and known as Bhoodan Pochampally.

34. Chattisgarh shares its boundary with which states?

Ans: Uttar Pradesh in north, Madhya Pradesh and Maharashtra in west, Telangana in southwest, Odisha in east and Jharkhand in northeast

36. First search engine invented by whom?

37. Which country has decided to separate from IWC?