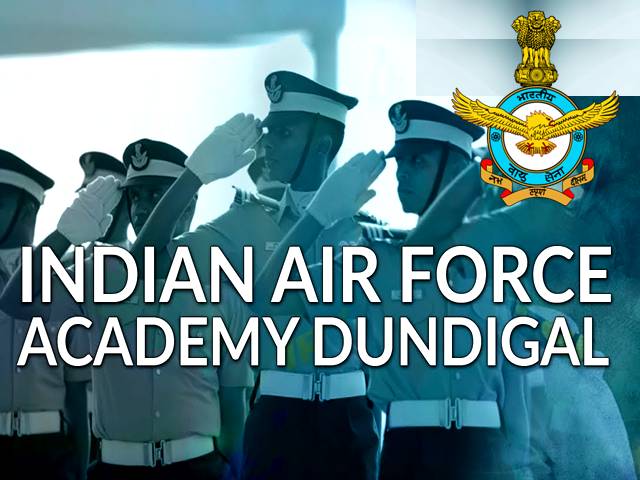 AFCAT July 2020 Course Commenced at Indian Air Force Academy (AFA) Dundigal: AFCAT January 2021 Course at AFA, Dundigal would commence from 30th January 2021. The reporting Date for all candidates featuring in the merit list is from 27th to 29th January 2021. The reception counter would be set up at Hyderabad Airport and Secunderabad Railway Station. All candidates are to contact TWA AFA on Mobile No. 9550330638 and share their travel details to make necessary arrangements for pick up.

A Reception Centre will be established at Airport Hyderabad and Secunderabad Railway Station Exit Gate from 0900 hrs- 1800 hrs on the day of your arrival.  Candidate’s move from Airport / Railway Station to Air Force Academy will be arranged by the Reception Centre. The Movement Control Officer (MCO) at the railway station can also be contacted for guidance.

Candidates are required to report for training on the due date and time as specified in the Call letter which has been sent to them by post /scanned copy by email.  Reporting late without proper authority is not permissible.  In case you report early please make your own arrangement until you report to Reception Centre as per laid down instructions.

DURATION OF TRAINING AND FITNESS

The duration of training and fitness are given in the subsequent paragraphs:-

Candidates will be provided suitable accommodation during the period of training.  It will be free of cost for those joining Flying/ Ground Duty Officer Courses whereas on rent as per government rates from Under Training Flying Officers (i.e. of Tech Courses / Met branch of Ground Duty Officer Course).  Permission to live out under own arrangement will not be granted during training period.

Free Messing will be arranged in the Flight Cadets’ Mess as per the entitlement.  Candidates may be charged for allied services as per the current rates.

The standards of medical fitness are as under:-

(a) Free medical facilities will be provided to you during the training period.  Please note that candidates will not be entitled to claim any compensation for any injury sustained while under training.  If they have any injury or have fallen sick after your Air Force Medical Examination, they are required to intimate to AFA about the same on arrival.

(b) A medical certificate as per format at Appendix ‘B’ completed by the candidate and signed by a qualified medical practitioner is to be furnished to AFA on their arrival.

(c) Candidates are required to maintain your medical fitness throughout the training. Candidate’s medical examination was conducted at Air Force Medical Establishments to ascertain his/her medical fitness as per laid down standards (including body weight) before reporting for pre-commissioning training.

Another medical examination would be held immediately on your arrival at AFA and these standards will be reconfirmed. Candidates will be admitted for training only if they are found medically fit as per the laid down standards. In case they are found medically unfit (including on grounds of obesity) on arrival at AFA, they shall not be permitted to commence training and will be routed back. The ideal body weight requirements are given in the tables below:-

The following procedure will be followed in respect of candidates who are either ‘Obese’ or ‘Overweight’:-

(bb) In case candidates who were re-flighted for being ‘Obese” are still found to be ‘obese’ on reporting for the next course their candidature would be cancelled by the Competent Authority and they would be routed home immediately by Commandant AFA.

Conditions pertaining to leave and discipline are given as:-

(a) While under training, no leave will be granted except on medical or compassionate grounds. Wedding ceremonies, festivals and similar occasions will not be considered as compassionate reasons for leave. Grant of leave will always be subject to exigencies of training. If a trainee fails to report at the Academy after expiry of the leave period, his / her commission / Cadetship is liable to be terminated in absentia. Cost of training and other expenses upon such termination become payable by him / her or his / her guarantor to the government, as in the case of voluntary withdrawal from training.

(b) While undergoing training at AFA, you will be governed by the rules and regulations in force and those which may be laid down in future. An indifferent attitude towards training may amount to deliberate failure and termination of training and he / she may be required to pay the entire cost of training. U/T Flying Officers / Flight Cadets considered undisciplined and suspended on these grounds will be debarred from entering Defence Services in any capacity. Technical & Met branch trainee officers will be governed by AF Act 1950 and Rules thereof. Therefore, they may be tried by a Court Martial or punished otherwise for any of the offences as laid down in the Act.

(c) Ex-airmen Cadets / Under-Trainee Officers are entitled for free railway conveyance of FRW by entitled Class, once annually during the term break to and from their homes.

To equip candidates with correct kitting requirements during training, as also subsequently during their service career, post commissioning, certain items (including various uniforms) will be issued to them on their arrival at AFA, whose payment will be effected through the outfit Allowance which they will be entitled to. Certain other items will also be issued to them on arrival at AFA and payment effected subsequently. Some of these items are:-

Candidates should be in possession of the following items of clothing on arrival at AFA:-

To ensure uniformity and correctness of pattern, the following items will be issued to the candidates by the Academy on payment / issue, as applicable

In case of airmen candidates, the cost of the items listed above would be met from the pay and allowances that they receive during their training at AFA.

The Academy has a well-stocked Unit Run Canteen, to meet day to day requirements.  AFA has a State Bank of India branch operating within the campus and an ICICI ATM.

You must carry at least Rs 10,000/- as pocket allowance to meet your initial kitting requirements. This is to meet the cost of kit issued to you and not covered by outfit allowances. This may be carried by a DD to be in favour of PMC, Flight Cadets’ Mess payable at SBI Dundigal/ Secunderabad/ Hyderabad.

Candidates joining Technical Courses are advised to bring the books listed below:

Please note that in case a candidate wish to withdraw from training for any reason whatsoever or refuse to accept the commission, if offered, he/she will be required to pay the entire cost of training to the Government as per the undertaking given by them/ their parents/ guarantor. This amount will have to be deposited by the candidate before his/her resignation or request for withdrawal from training is forwarded to the higher authorities by the Training Institute.

Following documents, duly completed, must be handed over to the Training Coordination Officer on arrival, without which you will not be permitted to join course:-

(Of the documents mentioned from sub para (h) to (k), one is mandatory)

Note:   Candidates should have PAN card on arrival. If not in possession, must have applied for the same prior to reporting for training. This is required to facilitate payment of stipend.  Candidates are advised to open bank a/c with SBI or any national bank that are having core banking facilities, prior to reporting to AFA.

Candidates are neither allowed to keep any pets nor any private servants at AFA. Use of the following items is not permissible, so please do not bring them:-

You are required to execute a ‘WILL’, the text of which is given at Appendix ‘F, and hand over the same at AFA.

Candidates less than 25 years of age are required to be unmarried in order to join training. ‘Unmarried’ excludes widows and divorcees even though without encumbrances. However, marriage is no bar for candidates above 25 years. However, you will not be permitted to marry during the period of training nor will you be allowed to live with family during the period of training (living in or out), even if you are above 25 years of age and married.

Candidate’s Permanent Commission on probation/ Short Service Commission on probation/ Provisional Short Service Commission is subject to satisfactory verification of his/her character and antecedents by the police/ civil Government authorities. His/her commission will be terminated forthwith in the event of adverse report being received from the police/ civil Government authorities or in the case of non-submission of original degree certificates.

(a)   For Flying / Ground Duty Branches.     As a Flight Cadet, you will receive a fixed stipend of Rs 56100/- per month for the full period of training. On successful completion of training, you will be commissioned in the rank of Flying Officer.

(b)  For Met branch only. Your stipend will be converted to pay for all purposes on successful completion of training with retrospective effect and the allowances admissible on such pay will be paid thereupon on such conversion.

(c)  For Tech Branches. On commissioning, your pay will be in the integrated pay band of a U/T Flying Officer.

Candidates will be insured under the Air Force Group Insurance Scheme (on contribution) as applicable.

Gratuity - On completion of their tenure they shall be paid Gratuity at the rates applicable.

The candidate will be administered an Oath/ Affirmation of allegiance (as per the format mentioned in Appendix-A) at the appropriate phase of your training (in respect of UTFOs)/ upon commissioning (in respect of other Flight Cadets).  Should he/she fail to take such oath/ affirmation, his/her training/ commission shall be terminated and he/she shall be liable to repay to the government the entire training costs and other expenses and for this purpose, his/her failure shall be deemed to be due to a cause within your control. He/she shall also be debarred from joining the IAF at any time in the future.  Further, failure to take an oath/affirmation of allegiance even after commissioning, as and when directed by the authority, will entail termination of his/her commission on that ground.  Officers will remain on probation for a period of six months in case of Permanent Commission Officers and one year in case of Short Service Commission Officers.  Airmen candidate will be governed by AFI 20/76 during the training period.

Terms and conditions of service for various branches are as governed by government rules amended from time to time.