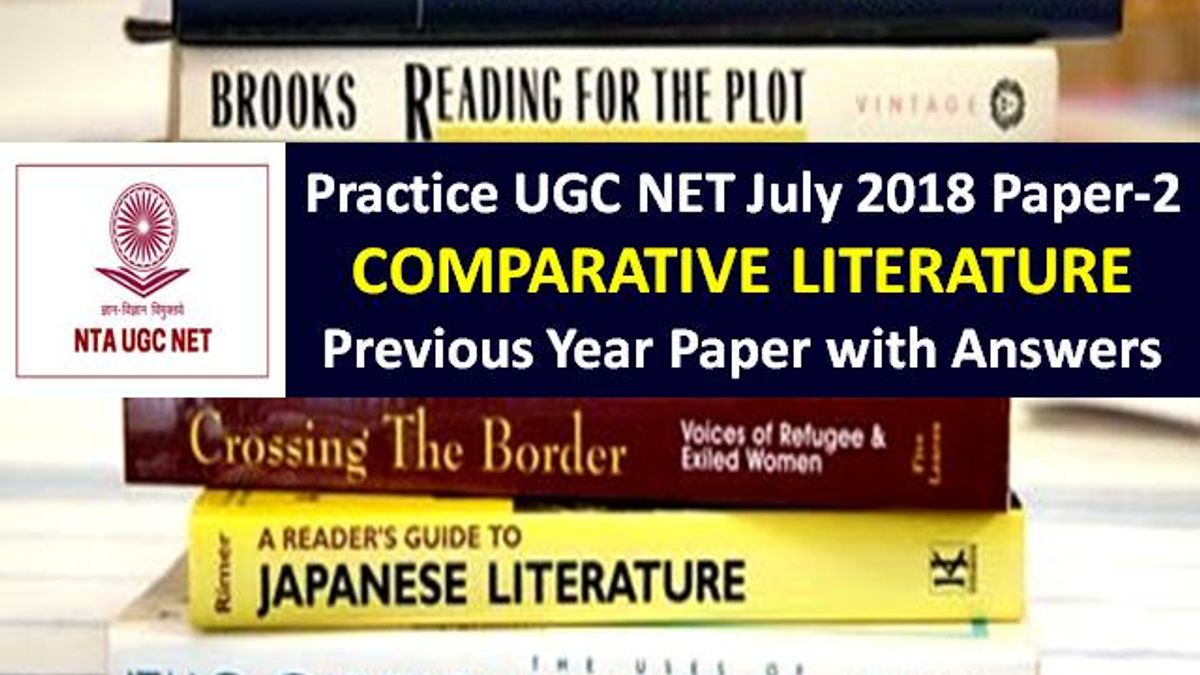 (1) The Indian historians disagree about the nature of feudalism in India.

(2) The ‘ancient’ and ‘medieval’ vary for different Indian languages.

(3) Literary periodization in India follows a dichotomy between courtly and popular.

(4) India has more than one classical language.

4. Identify the comparatist who almost omits thematology from comparative literature because it does not involve literary influences:

5. Who among the following is associated with the elucidation of the theory of interliterary processes?

7. Match the autobiography with the writer.

8. The French scholar Paul Van Tieghem, while trying for a more precise definition of the term ‘General Literature’ uses the alternate term __________.

10. Who among the following described the complex, multilingual situation of India as the Bower of Babel, taking the sting out of Steiner’s earlier use of Tower of Babel?

11. Who among the following coined the term, “Carpe diem”?

13. The following two genres were written in modern Bangla poetry:

14. Match the Shakespeare adaptations in Indian languages with the original text.

16. The relevance of philosophy to the understanding of the Bible as literature is exemplified by:

18. __________ thought of the hermeneutic circle as an ontological issue rather than an issue in interpretation.

19. According to __________, the analysis of culture is not an experimental science in search of law but an interpretive one in search of meaning.

20. In 1883 Richard Burton translated Vatsayana’s Kama Sutra and published it ‘for private circulation’ by the ‘Kama-Sastra Society of London and Benares’, a society which had first one member other than Barton himself, his friend and collaborator in this translation. Who was the collaborator?

(2) Rohstoff and stoff are categories in Historigraphy

(4) Rohstoff and stoff belong to thematology

22. Which author covers Sturm and Drang Classicism and Romanticism?

23. Which of the following is not a feature of Fakir Mohan Senapati’s classic novel, Chha Mana Atha Guntha?

(1) deft handling of the spoken language

(2) exploritation of the poor villagers by the zamindars

(4) the erosion of moral values in society

24. Which of the following novels has literary theory as a theme?

25. Who among the following critics is not associated with the literary method of close reading?

27. When we trace the development of genre in Europe since Petrarch’s day we contribute to __________, whereas when we compare a Shakespearean sonnet with a Petrarchan one we are within the area of __________.

28. Match the biographics with their writers:

30. Identify two theoretical concepts that are critically important in the disciplinary evolution of Cultural Studies:

34. Who is the English translator of Valmiki’s Joothan?

36. On which Greek play did Sigmund Freud write, “the play is so effective even to modern audience because it is the fate of all of us, perhaps to direct our first sexual impulse towards our mother and our first hatred and our first murderous wish against our father”.

37. In a James Joyce short story the protagonist hears a song that sparks a melancholy recollection of a major event in her youth. Identify the story:

39. Based on the Mahabharata, Draupadi-centred texts in the Gingee or Senji cult tradition of South India belong to the genre of __________.

40. Which of the following features would you associate with the idea of the postmodern?

41. Who among the following made a rigid and sharp distinction between General Literature and Comparative Literature?

42. According to Tamil Literature, which of the following is not Bhakti Literature?

The correct answer according to the code is:

46. Arrange the following in the sequence in which they appeared:

The correct answer according to the code is:

48. Who among the following pointed out that the historical context of any text is infinite, and hence that the historical or sociological explanation of the literary series must, if rigorously pursued in detail, focus not on a literature, but on social totality of which literature is one manifestation?

50. Assertion (A): A single literary history is a history also of its relations to other literatures.

Reason (R): When a literature’s many points of intersection with other literatures are mapped the literary historian confronts a complex network.

In the light of the statements above.

51. In which year the Tamil novel Prathapa Mudaliar Charithram was published?

52. Match the following films with the books/stories:

53. The idea of “equivalence without identity” in the area of translation studies was proposed by:

54. Who among the following is NOT a globalization theorist?

55. Which State of the Discipline Report of American Comparative Literature Association holds that a “work’s value is perceived as residing primarily in the authenticity of the image it conveys of culture it is taken to represent, politically and mimetically”?

57. Match the concepts with their descriptions.

59. Terry Eagleton proposed that the focus of translation theory should shift from source and target text opposition to __________.

Science Students can apply for these UGC NET Subjects

(1) anticipated the Hegelian vision of history.

(2) opposed the Enlightenment view of progress.

(4) did away with the need for periodization.

63. Which of the following theorists conceptualized the symbolic form as tripartite?

65. __________ is defined by Frenzel as “a repetition of the same word sequence, at least by way of allusion, or in slight variations, at different points of poetic work”, but related to each other through their common characteristics.

66. Who among the following famously characterized the field of comparative literature “as a yearning rather than an object”?

67. Who among the following is NOT a translator of Goethe’s Faust?

68. Nationalist themes portraying communal harmony in Hindi drama were influenced by the plays of __________.

Commerce Students can apply for these UGC NET Subjects

Arts & Humanities Students can apply for these UGC NET Subjects

73. Who bemoans the fact that in most literary histories medieval literature is staggered primarily according to sociological, or philological view points, and that criteria derived from stylistics are only hesitantly used?

The correct pairs according to the code are:

75. Which of these four main Dravidian languages had the richest and longest history of Manipravala?

76. In Dialectic of Enlightenment, Adorno and Horkheimer describe the enlightenment as ___________.

77. Assertion (A): Historical novels written from Scott to Stendhal all share common features from one to another.

Reason (R): Historical novels as a family type has different features, but no feature is common to all.

In the light of the preceding statements:

78. The Tamil writer Vasanthy, through her art of writing the novel __________ celebrates literature and dance.

80. In translation theory a __________ approach is associated with favouring the target text/ reader/language and culture.

(2) Translations should be discarded for originals

(3) Ignorance of languages such as Russian, Japanese, Chinese and Arabic is absolutely unacceptable

(4) The new comparative method should reject the aesthetic, the integrated study of forms and the comparative analysis of metrical systems and symbols

82. Identify the language which the writers used:

83. The development of stoffgeschichte in the 19th century focused on:

(2) the migration of themes

(3) the identification of themes with genres

(4) the organization of historical periods under manageable rubrics

(3) Walter Benjamin ; “Task of the Translator”

(4) George Steiner; “The Retreat from the Word”

85. A study of international literary relations, i.e, Italian in Shakespeare’s England, English in the Germany of Lessing and the German in the France of the post-Napoleonic period is a study of the __________ relationship.

86. Which small thematic unit, according to Petsch, can be raised to the level of motif by means of ‘Pointe’ that shows it to be characteristic or symptomatic?

87. In which essay does Matthew Arnold make the statement “………. no single event, no single literature is adequately comprehended except in relation to other events, to other literatures.”

(1) “The Function of Criticism at the Present Time”

(2) “On the Modern Element in Literature”

89. Match the subtitles with the main titles:

90. Assertion (A): Periods are entities we love to hate yet we cannot do without them.

Reason (R): Periodization in literary studies raises questions common to every historiographical enterprise, namely those related to the reconstruction of the past and the apprehension of time.

In the light of the statements above.

93. Assertion (A): A literary text is not a phonetic system but is also a semantic system.

In the light of the statements above

94. Which of the following writers is NOT from Kashmir?

95. Which poetic and religions movement is the theme of Karnad’s Raktakalyan?

96. Which of the following writers dealt with the legend of Orestes?

Read the following passage and answer questions from 98 to 100.

The genre, for Hirsch is not a class but a type: not an aggregate of works but a set of characteristics. The generic horizon (which is necessarily limited by the state of the genre at the time of the work’s composition, since Hirsch recognises only the author’s intended meaning and no others) is crucial in determining the work’s meaning. The interpreter, in positing the genre, surrounds the work with a horizon of expectations against which it must be read. The idea that literary meaning is encoded by the generic type is an easily recognisable and influential notion, but Hirsch’s interpretative model is both historicist-in the sense of privileging the task of understanding the author’s past intention and anti-historical, in its refusal to accommodate generic history and change. The question of history is crucial to most disagreements about the nature of genre.

(1) He stresses the task of understanding the intention the author had.

(2) He links geners to the study of history.

(4) Meaning is constructed by historical memory.

99. The interpreter sets the work within a genre by locating it:

(1) in a national literary history

(2) in the understanding of the author’s intention

(3) in a horizon of expectations

(4) in a set of characteristics

(1) defined by the literary meaning

(2) limited to the state of the genre

(4) characterized by the random disruption of hierarchies

Practice makes the man perfect! The more you will practice, the more accuracy you will gain which will eventually lead you to a high score in the exam. Practice will help you in avoiding silly mistakes and making unnecessary guess works while attempting NTA UGC NET 2020 Exam. Therefore, practicing previous year papers will help you in achieving accuracy and high score in NTA UGC NET 2020 Exam.