SSC CHSL 2022 Syllabus & Exam Pattern: In this article, we have compiled the latest exam pattern and detailed syllabus of the SSC CHSL 2022 Exam including Tier – I, Tier – II and Tier – III exam pattern which will help you in preparing for the exam in a systematic manner.

SSC CHSL 2022 Syllabus & Exam Pattern: Staff Selection Commission (SSC) will soon be conducting the Tier-1 CBE (Computer Based Examination) for SSC Combined Higher Secondary Level (10+2) 2022 Exam. So, the time has come for the students to start their preparation for the SSC CHSL 2022 Tier - I Exam.

So, we have compiled the latest exam pattern and detailed syllabus of SSC CHSL 2022 Exam including Tier – I, Tier – II and Tier – III exam pattern which will help you in preparing for the exam in a systematic manner. 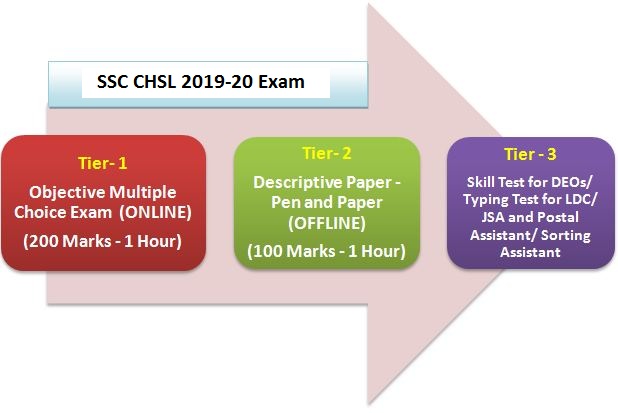 SSC CHSL 2022 Tier-I exam will be an Objective Multiple Choice Exam which will be conducted online. The exam comprises of four sections having 100 questions (25 questions in each section) which will account for a total of 200 marks (maximum 50 marks in each section). The time duration of Tier-1 exam will be 60 minutes. The section-wise details of the exam are shown in the table given below:

Students must go through the detailed syllabus of all the sections and frame a study plan which will be helpful to identify and focus on their weakest topics. Let’s look at the detailed syllabus of SSC CHSL Tier-I sections one-by-one:
1. English Language: This section tests the candidates’ ability to understand correct grammar usage, vocabulary usage and basic comprehension skills. Here is the list of topics covered in English Language and Comprehension Section of SSC CHSL Tier-I Exam:

2. General Intelligence & Reasoning: This section tests the candidates’ ability to think and problem solving skills. The questions asked in this question are mainly the brain teasers and sometimes can be quite tricky to answer. The questions will be of both verbal and non-verbal type out of the following chapters:

3. Quantitative Aptitude: This section will test the candidates’ mathematical skills and how good he/she with numbers. For developing proficiency in this section, candidates are required to develop great command over the general mathematical concepts, methods and their applicability. The questions will be designed to test the ability of appropriate use of numbers and number sense of the candidate. Below are the major topics covered in SSC CHSL Tier-I exam under the Quantitative Aptitude Section:

4. General Awareness: This section is considered to be one of the high scoring sections of the SSC CHSL Exam. It aims at testing the candidates’ general awareness of the environment around him/her and its application to society. Questions from current affairs taking place around the world and in India will also be a part of this section. Below are the major topics covered in SSC CHSL Tier-I exam under the General Awareness Section:

Candidates can click on the links given below to check the important topics section-wise:

SSC CHSL 2022 Tier-II will be a Descriptive Paper of 100 Marks in Pen and Paper Mode. The duration of the Descriptive Paper would be for one hour (20 minutes compensatory time will also be provided to the candidates eligible for scribes). The Paper would comprise writing of an Essay of 200-250 words and a Letter/ Application of approximately 150-200 words. The section-wise details of the exam are shown in the table given below:

As mentioned above Tier-II Paper will be a descriptive Paper of 100 Marks in ‘Pen and Paper’ Mode. Let’s look at the syllabus of Tier-II exam:

Post Preferences: Detailed options for various posts and Departments will be taken from candidates either online or at the time of document verification.

Final selection and allocation of Ministries/ Departments/ Offices to the candidates qualified in Tier-III will be made on the basis of the performance of candidates in the Tier-I+Tier-II Examinations and the preference of Posts/ Departments exercised by them at the time of Document Verification.

After going through the above mentioned detailed syllabus of SSC CHSL 2022 Exam, the next step is to create a study plan and start working on it. For instance, start your practice by solving some previous year question papers and analyse your strong & weak points. Regular practice will help in achieving accuracy and a high score in the exam.