CAT 2018 exam analysis is here for the Slot 1 taken by the CAT aspirants. The exam was conducted succesfully by IIM Calcutta on November 25 in 374 test centers in 144 test cities. Find out the CAT exam analysis here. 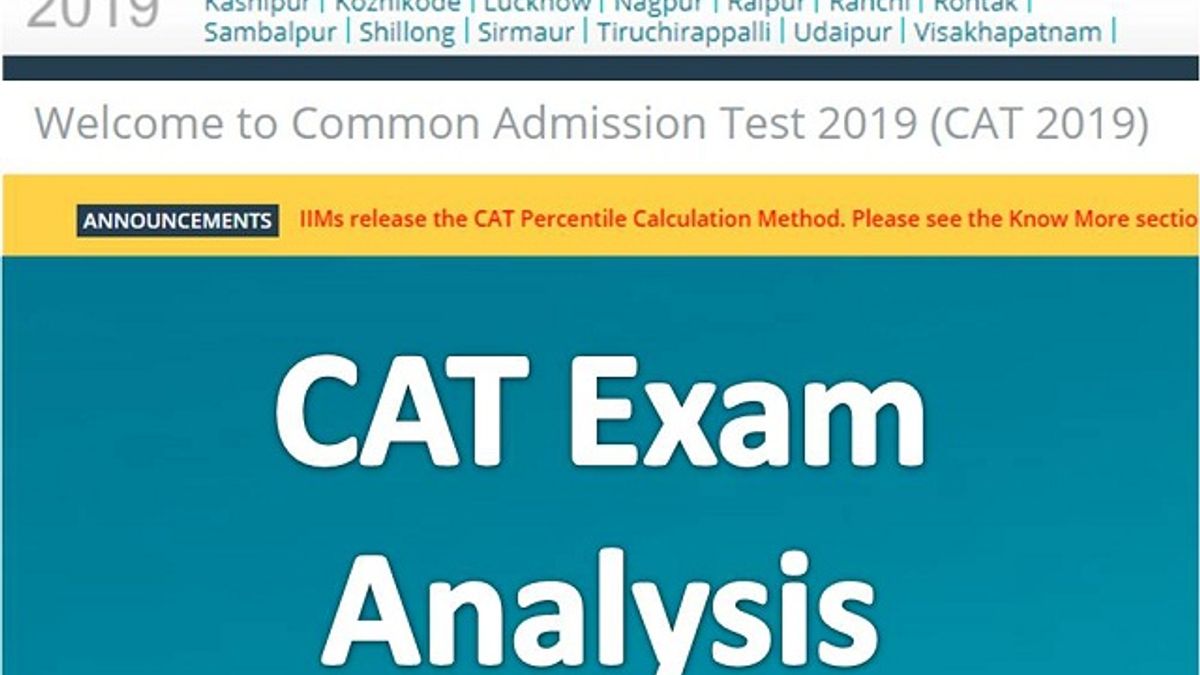 CAT 2018 Exam in the Slot 1 proved to be a tough nut to crack for most aspirants. The exam in the forenoon slot was conducted from 9:00am - 12:00am. As per the reviews of the CAT exam takers and experts, CAT exam was more difficult compared to the last three or four years with new elements being introduced in the exam. Overall the CAT 2018 Slot 1 paper was logical, however Quant section was calculation intensive.

One of the key surprises for CAT aspirants was that the exam was not similar to the official CAT 2018 mock test released by IIM Calcutta earlier.

CAT 2018 has come up with few changes in terms of MCQ and non-MCQ questions in the exam. Check out the number of questions in each section that were asked in the CAT exam:

As per the CAT scoring pattern, non-MCQ questions does not carry any negative marking, whereas the MCQ questions have +3 for the correct option and -1 for the incorrect one.

Quantitative Aptitude / QA section was the toughest among the three with a lot of surprises for the aspirants. Traditionally, Quant section has been easier in the CAT 2018 exam compared to the other two sections, but this year it was vice-versa. During the initial impressions the quant section seemed to be easier but thorough analysis proved other-wise. Quant was calculation intensive and therefore the lengthiest section and consumed the maximum amount of time for the candidates. The key stand-out point in Quant was that the difficulty level of the non-MCQs was higher compared to previous years.

DILR Section which was initially thought to be toughest section, but it was trickier in nature. It consisted of total 8 sets compared to the 4-5 sets in the previous year CAT exams.  The set-wise break-up for the same is given below:

VARC was the easiest section among all the three sections with 5 RC passages. The RC passages were focused on Economics, Sociology, Psychology and Literature. The 5th RC Passage was based on Culture of Elephants and its similarity to human civilization. VARC was comparatively easier than other sections.

Question 1: How was the overall CAT 2018 exam?
The overall CAT 2018 Exam was of moderate difficulty with no real surprises.
Question 2: Which was the toughest section and which was the easiest?
VARC was the easiest section while DI was toughest and Quant was of average difficulty level.
Question 3: Was the Question Paper lengthy compared to general trend?
The overall length of the paper was similar to the CAT 2018 official mock test. No particular section was too time consuming.
Question 4: What was the difficulty level of the paper as compared to the last year?
The overall difficulty level of CAT 2018 was moderate and similar to previous year.
Question 5: Which was most time consuming section?
Quant was the most time consuming section with a lot of emphasis on formula based and arithmetic questions.
Question 6: Was the CAT paper similar to the Official CAT Mock CAT released by the IIM Calcutta?
The CAT 2018 Slot 1 Paper was more or less on the same lines as that of official CAT 2018 mock test. However, the number of questions in each sections and the composition of MCQs and non-MCQs was different.
Question 7: What were the key topics in Verbal Ability section?
The VARC section consisted of majority of questions around Reading Comprehension and Para Jumbles or Sentence Arrangement questions.

As per the initial impressions of the CAT 2018, the exam was quite straight forward and difficult as compared to the last 3-4 years. DILR was the toughest section whereas Quant section was easier as compared to previous years. QA was most time consuming sections and primarily focused on Arithmetic problems which was manageable for most candidates. VARC was of moderate difficulty with maximum scoring opportunities.

Overall difficulty level was of the paper was higher as compared to previous years. The main idea behind CAT exam analysis 2018 is to offer first hand guidance to the future CAT aspirants, who can understand the exam structure and become familiar with the exam pattern in order to perform on the exam day. On the CAT 2018 exam analysis front, the analysis will be done after the exam is held.

Let's also check out previous year CAT exam analysis to get a fair idea about the difficulty level of the exam:

CAT 2016 was on the similar lines following previous year’s trend. The number of non multiple choice questions was reduced to 25% from 28% in 2015; a setback for many students since non MCQs did not carry any negative marking. The CAT 2016 exam on overall was difficult compared to the CAT 2015 exam. According to the CAT exam analysis 2016, the VARC section was relatively easy, while the Para Jumbles and Odd Para Jumbles were tough to crack. The DILR and QA sections were moderate to difficult.

The previous year’s CAT exam was held with no technical glitches in any of its test centres. CAT 2018 will be conducted by IIM Calcutta this year. According to the latest reports, as many as 2.40 lakh candidates have registered for CAT 2018 exam. Also, seven new test cities have been added to the CAT exam cities list. This year CAT will be held across 147 test cities in India. From 2018 onwards, Jawaharlal Nehru University will start accepting CAT scores for admission to its management programmes.

Stay tuned to read the analysis of CAT exam slot 2 in a short while!