MICAT 2018 Exam Analysis: Get detailed exam analysis for MICAT 2018 I along with section-wise analysis and expected MICAT 2018 cutoffs for admission to MICA, Ahmedabad. 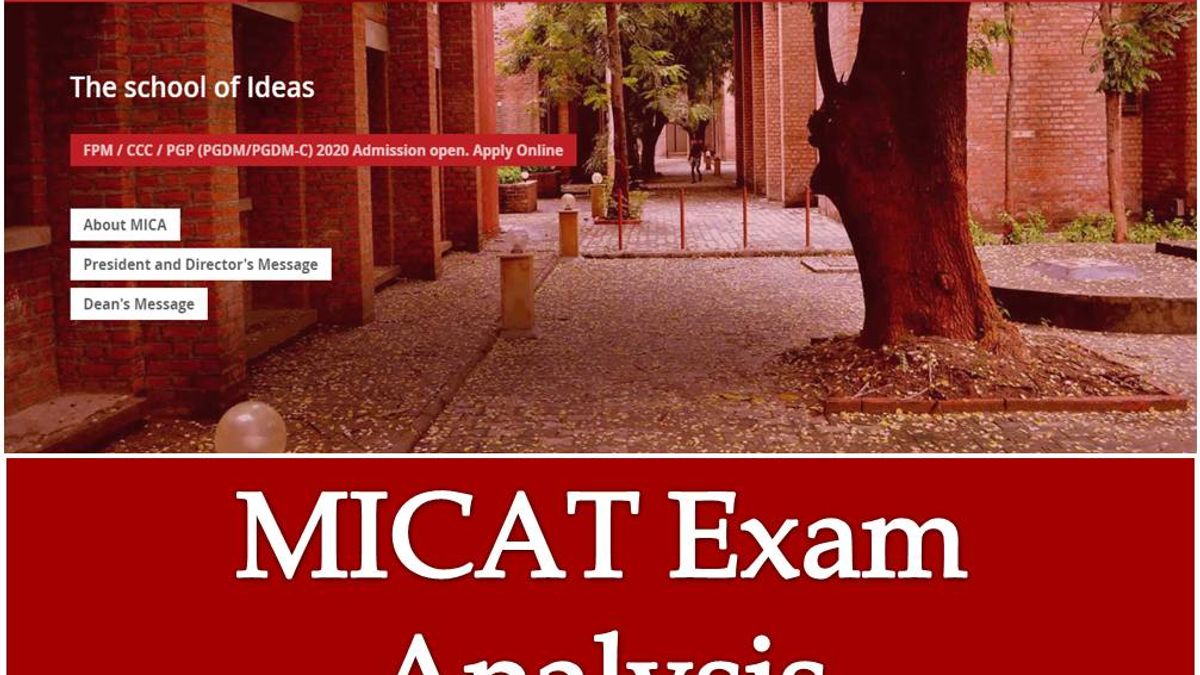 MICAT Exam Analysis 2018: MICAT 2018 exam was held on 1st December 2018. The test is conducted by MICA Ahmedabad and is the gateway for admission to the design institute. Experts at Jagranjosh.com has compiled a detailed exam analysis for MICAT 2018 Part I test that will help you decode your performance, provide you section-wise analysis and cutoffs along with overall MICAT 2018 cutoffs for admission to the institute.

MICAT 2018 Part 1 of the test was held on 1st December 2018. The entrance exam is held to screen students for admission to the Post Graduate Diploma Management in Communication for 2019-21 batch. The following are the initial impressions of experts at Jagranjosh.com for MICAT I 2018 exam:

MICAT 2018 is held in two instalments i.e. MICAT I which was held on 1st December 2018 and MICAT 2 which is scheduled to be held on 9th February 2019. The MICAT 2018 Exam consisted of three key tests or sections as listed below:

The sectional exam analysis of MICAT 2018 will help you to gauge your performance in the MBA entrance test and also help you to predict the MICAT 2018 score and cutoffs.

The Psychometric Test in MICAT 2018 is aimed at analysing the personality and personal traits of the candidates. Therefore, the test has no correct or incorrect answers. This test consisted of 27 questions which was fewer as compared to 36 questions in 2017.

Identification of Personality Traits: The first question of the Psychometric test asked the students it identify the 10 personality traits of characteristics that describe them the best.

Assessment of Personality Traits: Questions 2 to 17 were aimed at assessing the specific personality traits of the candidates. The question format presented two set of arguments before the candidates and they were provided the following six options to choose as the one that best described their response to the question.

Personality Preferences: Questions 18 to 27 were aimed at understanding personality preferences of the candidates. For these questions, candidates had to rank 6 choices or responses to the given statements in the decreasing order of importance.

Overall, the Psychometric test was pretty standard and candidates who have taken such tests in the past didn’t take much time to solve it.

The Descriptive Test was aimed at assessing the Written Ability Skills, Creative Skills and Analytical Skills of the test-takers. This section consisted of 4 descriptive questions which were to answered in 35 minutes.

For & Against Questions: The first three questions of the test were based on the same topic i.e. ‘Equality is a myth’. The first question asked the candidates to provide three points in favour of the topic. The second question asked the candidates to write three points against the topic. Both of these questions carried 10 marks each.

Essay Writing: The third question in the Descriptive Test asked the candidates to write a 300 word essay / passage to ‘suggest steps in which an equal world can be created’. As per the question instruction, candidates could not use the points included the first question as part of the answer to this question. This question carried 20 marks.

Pictorial Analysis: The fourth Question was based on Pictorial Analysis format in which candidates had to write down a particular pictorial combination to build a story. The four pictures provided for this question were:

Candidates had to arrange these pictures in a particular order to tell a story. This questions was worth 40 marks.

The third section of the MICAT 2018 consisted of four sub-sections i.e.

Questions in the non-verbal reasoning section were of easy to moderate difficulty level. The key themes or topics on which questions were asked include:

Verdict: Overall, in the Divergent & Convergent Thinking Section, candidates having 19 to 20 attempts with around 80% accuracy would deem to be good attempt.

Verbal Ability section was quite similar to the previous year question papers. The section consisted questions on double blanks, sentence corrections, paragraph completion, idiom-based questions, synonyms, jumbled paragraphs and other similar formats. The VA section also had once Reading Comprehension Paragraph, which was quite easy to manage. The detailed break-up of VA section is given below:

Verdict: For Verbal Ability section, attempting of 19-20 question with around 80% accuracy will ensure that candidate clears the sectional cut-offs.

The core Quant section was dominated by questions based on Arithmetic followed by Modern Math and Number systems. Surprisingly, there were no questions based on Geometry and Algebra unlike CAT or IIFT exams. The detailed break-up of questions can be found below:

Verdict: Overall, the Quantitative questions were based on elementary concepts and therefore were easy but time-consuming in nature. The overall difficulty level can be termed as moderate.

Verdict: Overall attempt of about 13 to 15 questions with 85% accuracy will be termed as a good attempt.

The key themes in the General Awareness section revolved around business, government, politics, ad agencies, laws and acts, and logos.

The detailed break-up of GA section for MICAT 2018 is as follows:

In terms of level of difficulty, 8 questions were relatively easy, 13 were of moderate difficulty while 4 were difficult and majority of the candidates faced problem while answering them.

Verdict: For General Awareness section, an attempt of 10 – 11 questions with 80% accuracy should be enough to get a call back.

Candidates who have managed to do well in the Psychometric test and those who are expecting a score of 48-50 in Part III can term this as a good attempt. For the Written Ability test, candidates having average writing skill will be able to score around 55 to 60 marks.