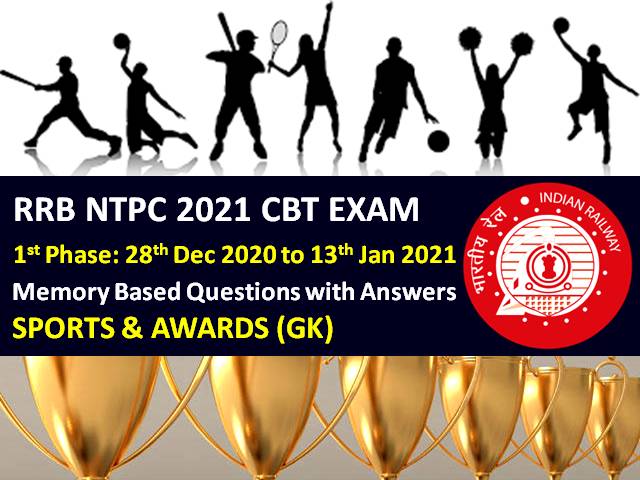 In this article we are going to share the important memory based General Knowledge - Sports & Awards Questions as per the feedback received by the candidates who have appeared for RRB NTPC 2020 Online Exam. Candidates are advised to definitely cover these questions for scoring high marks in the Exam. Let’s have a look at the Important Questions that are being covered in the RRB NTPC 2020 Exam:

Answer: The first ever international cricket game was played between the USA and Canada in 1844 at the St George's Cricket Club in New York and in 1859 a team of leading English professionals visited North America on the first-ever overseas tour.

3. When did Indian Hockey Team last won Gold medal in which Olympic?

5. How many players are there in a game of Kho Kho?

8. Rabindranath Tagore won the Nobel Prize in which year?

Answer: Pramod Kumar Mishra - The United Nations Sasakawa Award is the most prestigious international award in the area of Disaster Risk Management.

16. Which state will organize Khelo Games?

Answer: Haryana will host the fourth edition of the Khelo India Youth Games.

17. Common Wealth Games 2022 will be hosted by which country?

19. Commonwealth Youth Games 2021 was going to be hosted by:

Answer: The seventh Commonwealth Youth Games were scheduled to take place from August 1 to 7 2021 in Trinidad and Tobago and is now postponed to 2023.