RRB NTPC 2020-2021 Exam Memory Based History GK Questions with Answers: Get the memory based questions from General Knowledge - History that came in RRB NTPC 2020 Exam held in online mode from 28th December 2020 onwards. 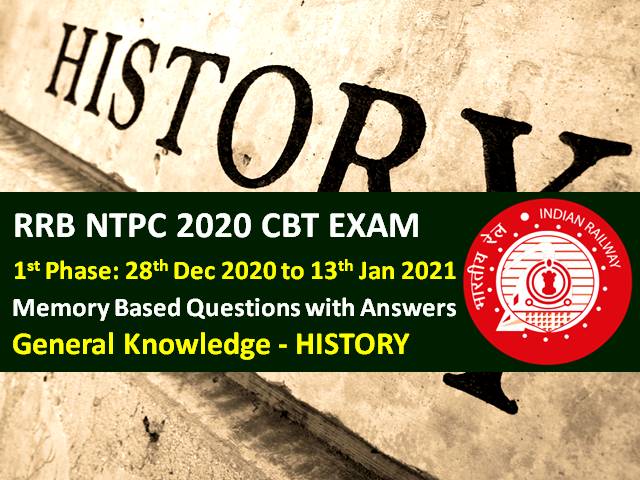 In this article, we are going to share the important memory based General Knowledge - History Questions as per the feedback received by the candidates who have appeared for RRB NTPC 2020 Online Exam. Candidates are advised to definitely cover these questions for scoring high marks in the Exam. Let’s have a look at the Important Questions that are being covered in the RRB NTPC 2020 Exam:

1. In which year did Bengal Division was happened?

Answer: 1905, the partition separated the largely Muslim eastern areas from the largely Hindu western areas on 16 October 1905 after being announced on 19 July 1905 by Lord Curzon, the then Viceroy of India.

2. 2nd Battle of Panipat was fought in:

Answer: The Second Battle of Panipat was fought between the forces of Samrat Hem Chandra Vikramaditya, popularly called Hemu, the Hindu king who was ruling North India from Delhi, and the army of Akbar, on November 5, 1556.

3. Prarthana Samaj was established in:

4. Who was First Tirthankar?

Answer:  Rishabhanatha, the first of the 24 Tirthankaras (“Ford-Makers,” i.e., saviours) of Jainism, a religion of India.

6. In which year Sanchi Stupa was observed as UNESCO World Heritage Site?

7. In which year Battle of Ghaghra was fought between Afghanistan and Babar?

8. Who was the president of Indian National Congress in 1924?

Answer: Conservative government under Stanley Baldwin to report on the working of the Indian constitution established by the Government of India Act of 1919. The commission consisted of seven members—four Conservatives, two Labourites, and one Liberal—under the joint chairmanship of the distinguished Liberal lawyer, Sir John Simon, and Clement Attlee, the future prime minister. Its composition met with a storm of criticism in India because Indians were excluded.

Answer: Ashoka - The Great Stupa at Sanchi is one of the earliest Buddhist monuments in India built by Emperor Ashoka.

Answer: White Revolution or Operation Flood started in the year 1970 and was aimed to create a nationwide milk grid. It was a rural development programme initiated by NDDB – National Dairy Development Board of India.

13. What was the name of horse of Maharana Pratap Singh?

15. Establishment of the Panchayati Raj System was recommended by:

16. When did Swami Vivekananda delivered his speech at the ‘World Religion Conference’ in Chicago?

Answer: The States Reorganisation Act, 1956 was a major reform of the boundaries of India's states and territories, organising them along linguistic lines.

19. Viceroy at the time of Jallianwala Bagh Massacre: