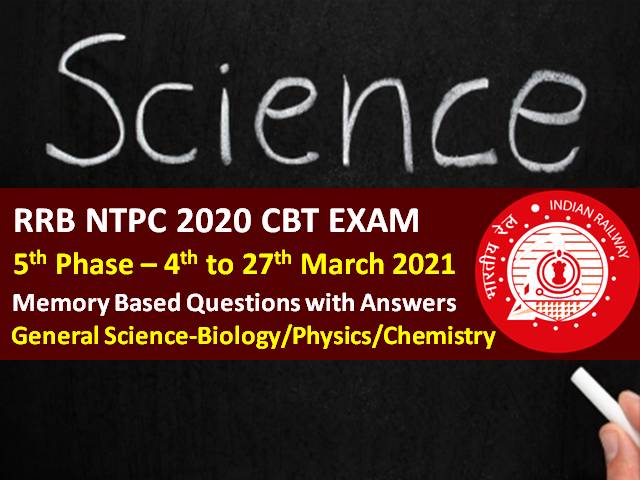 RRB NTPC 2021 Exam Memory Based General Science Questions with Answers (Phase-5): RRB NTPC 2021 Phase-5 CBT has been commenced from 4th March 2021 and will be conducted till 27th March 2021 for around 19 lakh Candidates across different exam centres in India. Computer Based Test (CBT) is being conducted for the recruitment of RRB Non-Technical Popular Categories (NTPC) 35281 Vacancies (Graduate & Under-Graduate Posts) in two shifts.

In this article, we are going to share the important memory-based General Awareness (GA)/ General Science (GS) Section (Biology/Physics/Chemistry) Questions as per the feedback received by the candidates who have appeared for RRB NTPC 2021 Online Exam. Candidates are advised to definitely cover these questions for scoring high marks in the Exam. Let’s have a look at the Important Questions that are being covered in the RRB NTPC 2021 Exam:

2. Which planet is the farthest from Sun?

Answer: Hydrogen sulfide (H2S) is a colourless gas with a characteristic odour of rotten eggs which is denser than air may pool in low areas in still conditions.

4. Hertz is the measurement unit of?

Answer: The hertz (symbol: Hz) is the SI unit of frequency.

Answer: Mundra Thermal Power Station is located at Mundra in Kutch district in the Indian state of Gujarat.

7. National Institute of Nutrition is located in:

8. In a Galaxy, core structure of a comet is known as:

Answer: Lagrangian point 1 (L1) - Aditya-L1 is a spacecraft mission to study the Sun.

11. World Arthritis Day is observed on:

Answer: 120 Days - When matured, in a healthy individual these cells live in blood circulation for about 100 to 120 days.

13. What is required for Photosynthesis?

14. Who is known as the Missile Man of India?

18. Which of the following is used as fuel in the rocket?

Answer: Most liquid chemical rockets use two separate propellants: a fuel and an oxidizer. Typical fuels include kerosene, alcohol, hydrazine and its derivatives, and liquid hydrogen. Many others have been tested and used. Oxidizers include nitric acid, nitrogen tetroxide, liquid oxygen, and liquid fluorine.

19. Which of the following has an equal number of electrons and protons?

Answer: Deuterium also known as heavy hydrogen is one of the two stable isotopes of hydrogen. The nucleus of deuterium called deuteron contains one proton and neutron.