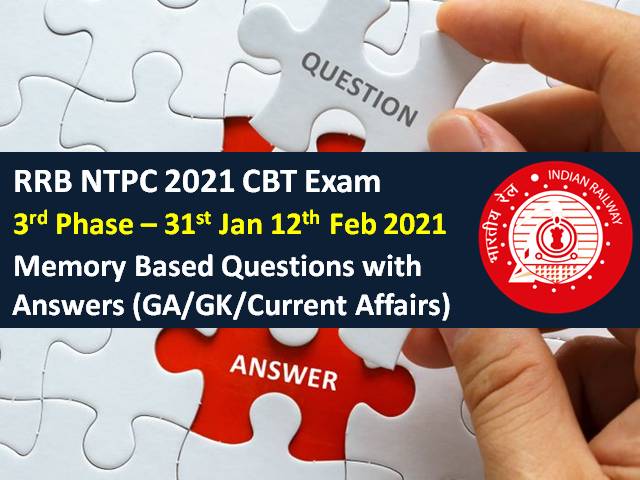 RRB NTPC 2021 Exam (Phase-3) Memory Based General Awareness Questions with Answers: RRB NTPC 2021 Phase-3 CBT Exam has been commenced from 31st January 2021 and will be conducted till 12th February 2021 for around 28 lakh Candidates across different exam centres in India. RRB NTPC 2021 Phase-4 CBT Exam will be conducted from 15th February to 3rd March 2021. Computer Based Test (CBT) is being conducted for the recruitment of RRB Non-Technical Popular Categories (NTPC) 35281 Vacancies (Graduate & Under-Graduate Posts) in two shifts.

Kalbelia is the Folk Dance of which Indian State?

Subsidiary Alliance was framed by:

Jallikattu Festival is from which State of India?

Mughal Emperor who granted the Diwani of Bengal, Bihar & Orissa to the East India Company:

First Livestock Census in India was conducted in which year?

Who was IPL 2020 most valuable player?

Writer of the the Book - ‘The End of Imagination’:

Baneshwar fair is conducted in:

Which river passes through the mountains of Mahabaleshwar?

The name of Neil Island has been changed to:

Indian Bank has been merged with which bank?

President Election is part of which article of Indian Constitution?

How many teams had participated in IPL 2020?

How many moons does Planet Mars have?

Mollem National Park is in:

Which country has the longest handwritten Constitution?

Answer: 5 - The UNSC has 15 member and five of them — US, UK, Russia, China and France — are permanent members, who have veto rights.

Answer: Alberuni is the author of Kitab-ul-Hind

Joint Session of Parliament comes under which article:

Majuli Island is on which river?

R.K. Laxman is related to which field:

In the suffix, it includes “-all” is from which group?

Vikramshila University was established by:

Brahmos was made by which two countries?

Who has recently resigned from WTO as its Chief?

Silk is generated from:

Answer: Fiber to the premises

Meghaduta is written by whom:

One question related to GST

One question related to Vidhansabha

Answer: Lesotho is also the southernmost landlocked country in the world and is entirely surrounded by South Africa.

Answer: The first five-year plan in India was launched in 1951.

The main focus in the 11th Five Year Plan:

Answer: The Eleventh Five Year Plan aims to achieve improved quality of life for the citizens of the state and contribute to the larger national goals of socio-economic development.

Mudumalai National Park is in:

Who is appointed as President of PTI?

Harappa civilization was discovered by:

Who provides the link between hardware and operator?

2016 rare dinosaur fossils were found in which state?

In a country, 20 boys were trapped in a cave. Which country was that?

Right to equality is in which article?

What is Bengal Gazette?

How many blue flag certificates have been awarded to Beaches in India?

The first Battle of Panipat:

Answer: 1526 - The First Battle of Panipat was fought between the forces of Babur and Ibrahim Lodi on 21 April 1526.

Who established the East India Society?

After Dandi March which movement was started?

Hornbill Festival is I which State of India?

When did Cripps Mission come to India?

Answer: The 73rd Amendment 1992 added a new Part IX to the constitution titled “The Panchayats” covering provisions from Article 243 to 243(O); and a new Eleventh Schedule covering 29 subjects within the functions of the Panchayats.

Name of cyclone in West Bengal came in 2020:

Satyamev Jayate is taken from which Upanishad?

Night blindness is caused due to deficiency of:

Kanha National Park is in:

Answer: DescriptionKanha National Park, also known as Kanha Tiger Reserve, is a vast expanse of grassland and forest in the central Indian state of Madhya Pradesh.

How to measure the speed of the Printer?

Great Barrier Reef is in:

Answer: The reef is located in the Coral Sea, off the coast of Queensland, Australia.

Ease of Doing Business Index launched by which organization?

Karakoram Pass is located in:

Answer: The Karakoram Pass is a 5,540 m or 18,176 ft mountain pass between India and China in the Karakoram Range.

Who was the Runner up of the Men’s Single Australian Open 2020?

What is the full form of LPG?

Champaran Satyagraha was held in which year?

Dilwara Temple is located in which Indian State?

World Red Cross Day is celebrated on which date?

Biography of Kalpana Chawla was written by:

Answer: Aparna Kumar has become the first woman Indian Police Service (IPS) and ITBP officer to successfully conquer the South Pole, the southernmost point on the globe situated in Antarctica.

In which of the following vitamin yeast is present?

Diphu Pass is in:

Happiness Index started in which year?

Which is the largest Oil Company in India?

Which is the largest Gas Reserve in the world?

In which year Internet in India started?

DPSP is in which part of the Indian Constitution?

Answer: Part III of the Constitution was made Justiciable and the non-justiciable part was added in Part IV (Article 36 to Article 51) of the Indian Constitution. This part is called the Directive Principles of State Policy. DPSPs are positive obligations on the state.

EVM first used in which State of India?

Battle of Plassey occurred in:

RAM is located in:

NH3 Passes through which States of India?

ISRO lost connection with Chandrayaan 1 on:

Chairman of Central Pollution Control Board:

Rani Padmavati was the queen of:

The largest boundary with India:

Full form of ADB or AIIB:

Vijay Nagar Empire was in: