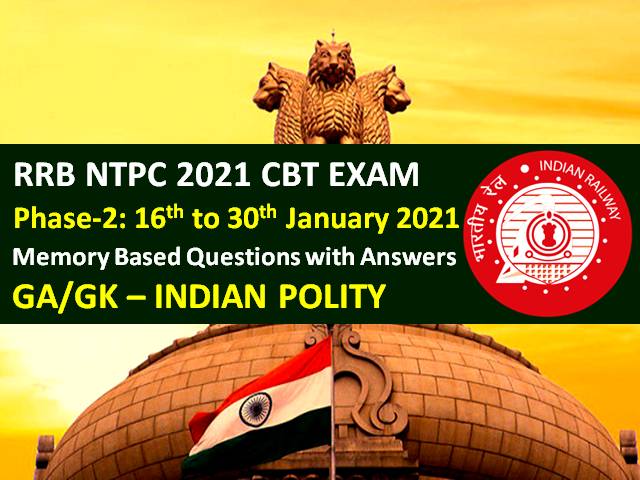 RRB NTPC 2021 Exam (Phase-2) Memory Based Indian Polity Questions with Answers: RRB NTPC 2021 Phase-2 CBT Exam has been commenced from 16th January 2021 and will be conducted till 30th January 2021 for around 27 lakh Candidates across different exam centres in India. Computer Based Test (CBT) is being conducted for the recruitment of RRB Non-Technical Popular Categories (NTPC) 35281 Vacancies (Graduate & Under-Graduate Posts) in two shifts.  RRB NTPC 2021 Phase-3 Exam will be conducted from 31st Jan to 12th Feb 2021 for around 28 Lakh candidates.

In this article, we are going to share the important memory based General Awareness (GA)/General Knowledge (GK) - Indian Polity Questions as per the feedback received by the candidates who have appeared for RRB NTPC 2021 Online Exam. Candidates are advised to definitely cover these questions for scoring high marks in the Exam. Let’s have a look at the Important Questions that are being covered in the RRB NTPC 2021 Exam:

1. Which of the following is present in the 8th Schedule of the Indian Constitution?

Answer: The Eighth Schedule to the Constitution of India lists the official languages of the Republic of India.

2. Article in Indian Constitution for Abolishment of Titles Article:

Answer: In July 1951, the Planning Commission issued the draft outline of the First Five Year Plan for the period April 1951 to March 1956.

6. Fundamental Duties are added through which Constitutional Amendment?

Answer: The Fundamental Duties of citizens were added to the Constitution by the 42nd Amendment in 1976, upon the recommendations of the Swaran Singh Committee that was constituted by the Government.

8. Supreme Court issue writs according to which article of Indian Constitution?

9. Who can summon the parliament for joint sitting?

10. President can nominate members from which community?

11. What is article 72 in Indian constitution?

Answer: Article 72 provides the President with the power to grant pardons, reprieves, respites, or remissions of punishment or to suspend, remit or commute the sentence of any person convicted of any offence

12. Who designed the logo of Lokpal?

13. Five Year Plan has been taken from which country’s constitution?

14. Article 30 of Indian Constitution is related to: