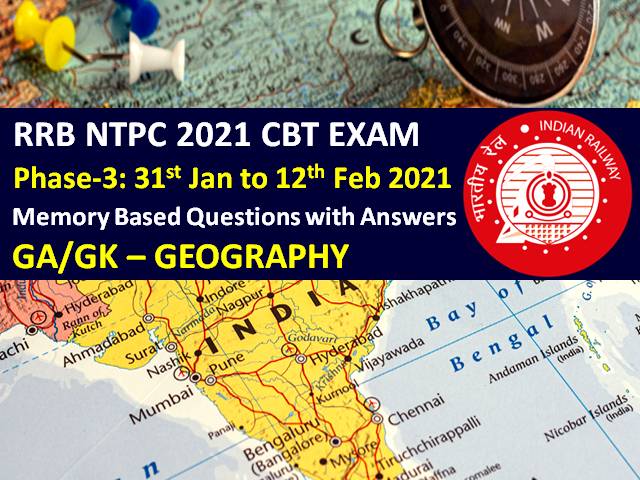 RRB NTPC 2021 Exam (Phase-3) Memory Based Geography Questions with Answers: RRB NTPC 2021 Phase-3 CBT has been commenced from 31st January 2021 and will be conducted till 12th February 2021 for around 28 lakh Candidates across different exam centres in India. Phase-4 will be conducted from 15th February to 3rd March 2021. Computer Based Test (CBT) is being conducted for the recruitment of RRB Non-Technical Popular Categories (NTPC) 35281 Vacancies (Graduate & Under-Graduate Posts) in two shifts.

In this article, we are going to share the important memory based General Awareness (GA)/General Knowledge (GK) - Geography Questions as per the feedback received by the candidates who have appeared for RRB NTPC 2021 Online Exam. Candidates are advised to definitely cover these questions for scoring high marks in the Exam. Let’s have a look at the Important Questions that are being covered in the RRB NTPC 2021 Exam:

Answer: Lesotho is also the southernmost landlocked country in the world and is entirely surrounded by South Africa.

3. Mudumalai National Park is in:

5. 2016 rare dinosaur fossils were found in which state?

6. In a country, 20 boys were trapped in a cave. Which country was that?

8. Hornbill Festival is celebrated in which State of India?

11. Kanha National Park is in:

Answer: DescriptionKanha National Park, also known as Kanha Tiger Reserve, is a vast expanse of grassland and forest in the central Indian state of Madhya Pradesh.

Answer: The reef is located in the Coral Sea, off the coast of Queensland, Australia.

13. Karakoram Pass is located in:

Answer: The Karakoram Pass is a 5,540 m or 18,176 ft mountain pass between India and China in the Karakoram Range.

14. Dilwara Temple is located in which Indian State?

16. NH3 Passes through which States of India?

18. The largest boundary with India:

19. Vijay Nagar Empire was in:

20. Baneshwar fair is conducted in:

21. Which river passes through the mountains of Mahabaleshwar?

23. The name of Neil Island has been changed to:

24. Mollem National Park is in:

27. Majuli Island is on which river?

28. Kalbelia is the Folk Dance of which Indian State?

29. Jallikattu Festival is from which State of India?