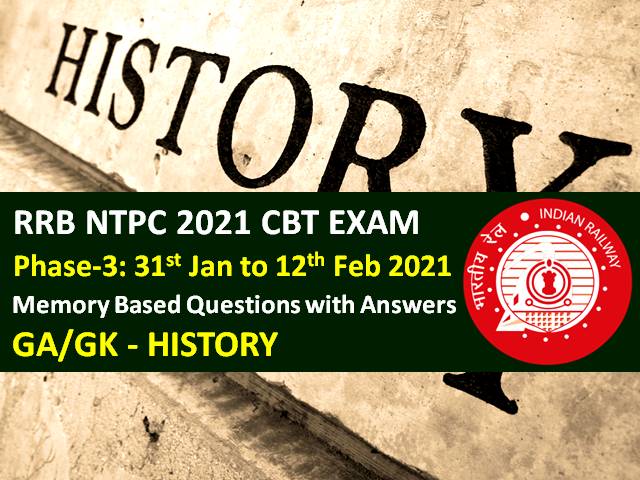 RRB NTPC 2021 Exam (Phase-3) Memory Based History Questions with Answers: RRB NTPC 2021 Phase-3 CBT has been commenced from 31st January 2021 and will be conducted till 12th February 2021 for around 28 lakh Candidates across different exam centres in India. Phase-4 will be conducted from 15th February to 3rd March 2021. Computer Based Test (CBT) is being conducted for the recruitment of RRB Non-Technical Popular Categories (NTPC) 35281 Vacancies (Graduate & Under-Graduate Posts) in two shifts.

In this article, we are going to share the important memory-based General Awareness (GA)/General Knowledge (GK) - History Questions as per the feedback received by the candidates who have appeared for RRB NTPC 2021 Online Exam. Candidates are advised to definitely cover these questions for scoring high marks in the Exam. Let’s have a look at the Important Questions that are being covered in the RRB NTPC 2021 Exam:

1. First Livestock Census in India was conducted in which year?

5. Harappa civilization was discovered by:

9. What is Bengal Gazette?

10. The first Battle of Panipat:

Answer: 1526 - The First Battle of Panipat was fought between the forces of Babur and Ibrahim Lodi on 21 April 1526.

11. Who established the East India Society?

15. After Dandi March which movement was started?

16. When did Cripps Mission come to India?

18. Champaran Satyagraha was held in which year?

19. Battle of Plassey occurred in:

20. Rani Padmavati was the queen of:

21. Vijay Nagar Empire was in:

22. Mughal Emperor who granted the Diwani of Bengal, Bihar & Orissa to the East India Company: