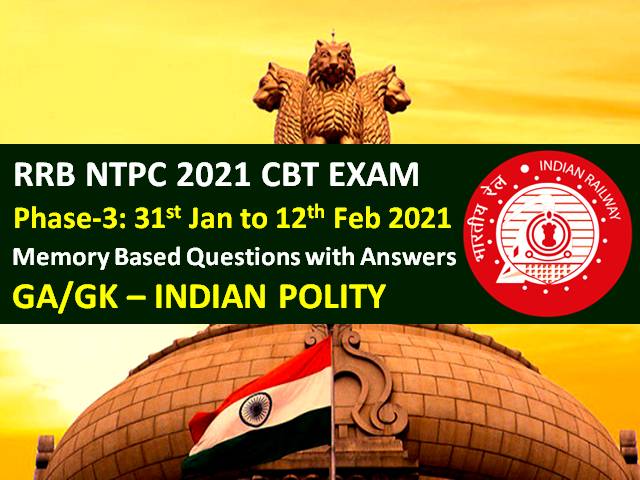 RRB NTPC 2021 Exam Memory Based Indian Polity Questions with Answers (Phase-3): RRB NTPC 2021 Phase-3 CBT has been commenced from 31st January 2021 and will be conducted till 12th February 2021 for around 28 lakh Candidates across different exam centres in India. Phase-4 will be conducted from 15th February to 3rd March 2021. Computer Based Test (CBT) is being conducted for the recruitment of RRB Non-Technical Popular Categories (NTPC) 35281 Vacancies (Graduate & Under-Graduate Posts) in two shifts.

In this article, we are going to share the important memory based General Awareness (GA)/General Knowledge (GK) - Indian Polity Questions as per the feedback received by the candidates who have appeared for RRB NTPC 2021 Online Exam. Candidates are advised to definitely cover these questions for scoring high marks in the Exam. Let’s have a look at the Important Questions that are being covered in the RRB NTPC 2021 Exam:

1. First Livestock Census in India was conducted in which year?

2. President Election is part of which article of Indian Constitution?

4. Which country has the longest handwritten Constitution?

5. Joint Session of Parliament comes under which article:

Answer: The first five-year plan in India was launched in 1951.

Answer: The Eleventh Five Year Plan aims to achieve improved quality of life for the citizens of the state and contribute to the larger national goals of socio-economic development.

9. Right to equality is in which article?

14. Answer: The 73rd Amendment 1992 added a new Part IX to the constitution titled “The Panchayats” covering provisions from Article 243 to 243(O); and a new Eleventh Schedule covering 29 subjects within the functions of the Panchayats.

18. DPSP is in which part of the Indian Constitution?

Answer: Part III of the Constitution was made Justiciable and the non-justiciable part was added in Part IV (Article 36 to Article 51) of the Indian Constitution. This part is called the Directive Principles of State Policy. DPSPs are positive obligations on the state.

20. Chairman of Central Pollution Control Board: