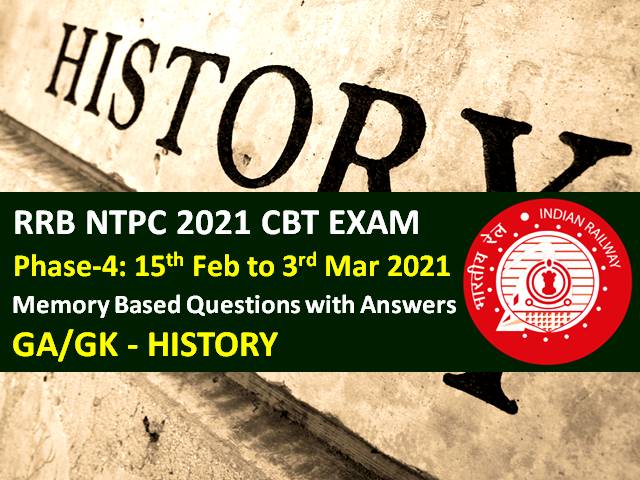 RRB NTPC 2021 Exam (Phase-4) Memory Based History Questions with Answers: RRB NTPC 2021 Phase-4 CBT has been commenced from 15th February 2021 and will be conducted till 3rd March 2021 for around 16 lakh Candidates across different exam centres in India. Phase-5 will be conducted from 4th to 27th March 2021. Computer Based Test (CBT) is being conducted for the recruitment of RRB Non-Technical Popular Categories (NTPC) 35281 Vacancies (Graduate & Under-Graduate Posts) in two shifts.

In this article, we are going to share the important memory-based General Awareness (GA)/General Knowledge (GK) - History Questions as per the feedback received by the candidates who have appeared for RRB NTPC 2021 Online Exam. Candidates are advised to definitely cover these questions for scoring high marks in the Exam. Let’s have a look at the Important Questions that are being covered in the RRB NTPC 2021 Exam:

1. Salt satyagraha movement was held on which date?

2. “Karo ya Maro” Slogan was given in which movement?

4. Golden Age of Ancient India was under which ruler?

5. Which Indian Freedom Fighter made Hindi as the Official Language of India?

Answer: king Jajati Keshari - Lingaraj Temple, built in 11th century, is dedicated to Lord Shiva and is considered as the largest temple of Bhubhneshwar.

Answer: The Nobel Prize in Physiology or Medicine 1968 was awarded jointly to Robert W. Holley, Har Gobind Khorana and Marshall W. Nirenberg "for their interpretation of the genetic code and its function in protein synthesis."

Answer: The Ādittapariyāya Sutta is a discourse from the Pali Canon, popularly known as the Fire Sermon. In this discourse, the Buddha preaches about achieving liberation from suffering through detachment from the five senses and mind.

9. Quit India Movement was started in:

11. First World Environment Day was celebrated in which year?

Answer: Mohenjo-daro was discovered in 1922 by R. D. Banerji, an officer of the Archaeological Survey of India

13. How many years passed since the Quit India Movement happened in India?

14. First Prime Minister of India to be born after the Independence of India:

Answer: Murlikant Petkar - In the 1972 Summer Paralympics, held at Heidelberg, West German from August 2 to 11, Mr. Murlikant Petkar swam the 50m Free Style in a world record time of 37.331 seconds to give India her first-ever Gold.