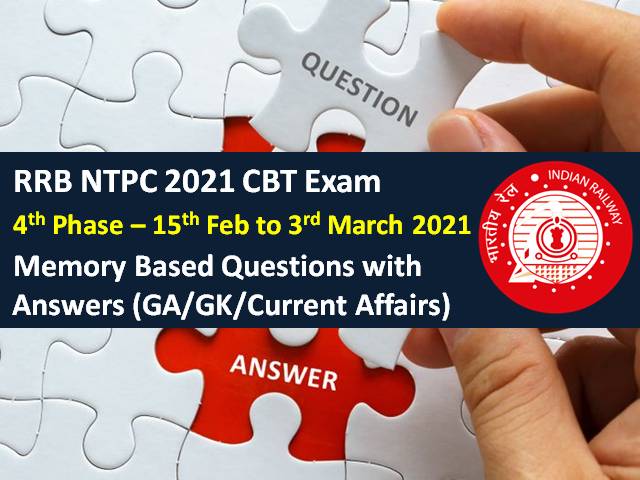 RRB NTPC 2021 Exam (Phase-4) Memory Based General Awareness (GA)/GK/ Current Affairs Questions with Answers: RRB NTPC 2021 Phase-4 CBT Exam has been commenced from 15th February and will be conducted till 3rd March 2021 for around 16 lakh candidates across different exam centres in India. Computer Based Test (CBT) is being conducted for the recruitment of RRB Non-Technical Popular Categories (NTPC) 35281 Vacancies (Graduate & Under-Graduate Posts) in two shifts.

When was UNO established?

What is the Full form of BARC?

What is the Full form of AIDS?

Salt satyagraha movement was held on which date?

“Karo ya Maro” Slogan was given in which movement?

What is the ranking of BSE in the world Stock Exchange?

Five year plan which ended in 2017 is which number of five-year plan?

Who was the man of the match in ICC Cricket World Cup 2019?

Which of the following is in the UNSECO World Heritage Site?

Which of the following is not a computer language?

Which of the following mountains is in west?

Retinol is found in which vitamin?

Which of the following is not a Part of Carbon?

In 1911, Nobel Prize was given to Madam Curie in which field?

Answer: The Republic of South Sudan

3. Golden Age of Ancient India was under which ruler?

4. Which of the following is not an active volcano?

5. In 2011, which chemical was banned by Supreme Court of India?

6. Which two cities in India are on the UNESCO World Heritage list?​

Answer: 21 February was declared to be the International Mother Language Day by UNESCO in 1999. It has been observed throughout the world since 21 February 2000.

9. Form of farming where trees are planted mainly to protect animals or crops from cold winds, but also to give shade in hot weather:

10. Which Indian Freedom Fighter made Hindi as the Official Language of India?

11. What is the official name of Java Script?

12. National Food for Work Programme was started in:

14. Satellite launched in 2018 that was the heaviest amongst all in India?

15. How many cities are included in HRIDAY Yojana?

Answer: king Jajati Keshari - Lingaraj Temple, built in 11th century, is dedicated to Lord Shiva and is considered as the largest temple of Bhubhneshwar.

Answer: Globalization 4.0: Shaping a Global Architecture in the Age of the Fourth Industrial Revolution

Answer: The Nobel Prize in Physiology or Medicine 1968 was awarded jointly to Robert W. Holley, Har Gobind Khorana and Marshall W. Nirenberg "for their interpretation of the genetic code and its function in protein synthesis."

Answer: The Ādittapariyāya Sutta is a discourse from the Pali Canon, popularly known as the Fire Sermon. In this discourse, the Buddha preaches about achieving liberation from suffering through detachment from the five senses and mind.

21. Which Indian State ranked the top amongst Business Startup?

23. Which is the longest Expressway of India?

24. Quit India Movement was started in:

25. SAIL is what kind of Authority?

26. Norman Borlaug Award is given in which field?

28. Which of the following is known as Foolish Rice Seedlings?

Answer: A disease of rice known as Bakanae or “foolish seedling” disease in which the plants grew inordinately long, became weak, and eventually fell over and died.

1. Mathuri dance is from which state:

2. Who designed the Indian Rupee Symbol?

3. Day on which Earth is at the farthest point in its orbit around the sun is known as:

Answer: Anna Burns was awarded the 2018 Booker Prize for her third novel, Milkman

7. When did India became the member of United Nations?

8. Touch-me-not plant is of which Plant Kingdom?

Answer: Family: Fabaceae, Subfamily: Mimosoideae Touch-me-not (Mimosa pudica) is also called as a sensitive plant or sleepy plant because it folds its leaves when touched or exposed to heat

Answer: In 1991, the 69th Constitutional Amendment granted special state to Delhi and it was declared the National Capital Territory while the Lieutenant Governor was nominated the Administrator of Delhi. It created a state assembly and council of ministers for the state.

12. Which Scheme of Prime Minister is carried on by NABARD?

1. Kolhapuri language is spoken in which state?

2. First World Environment Day was celebrated in which year?

3. A special drive being taken by the police to trace the missing children in Andhra Pradesh:

6. Which one of the following is the Bacterial Disease?

Answer: AIDS (Amongst the options)

8. Which UNO Authority helps in keeping check on Drug Addict and crime related to it?

10. Which organ control the respiration?

Answer: Mohenjo-daro was discovered in 1922 by R. D. Banerji, an officer of the Archaeological Survey of India

13. 124th Ammendment Bill of Indian Constitution is related to:

14. Deficiency of Vitamin B9 causes which disease?

15. Outer Layer of Earth is called:

18. How many years passed since the Quit India Movement happened in India?

19. First Prime Minister of India to be born after the Independence of India:

23. Elephant Temple is in which state?

Answer: Murlikant Petkar - In the 1972 Summer Paralympics, held at Heidelberg, West German from August 2 to 11, Mr. Murlikant Petkar swam the 50m Free Style in a world record time of 37.331 seconds to give India her first-ever Gold.