RRB NTPC 2021 Exam Memory Based Questions with Answers (Phase-6): Get the memory based questions from General Awareness, GK & Current Affairs section that came in RRB NTPC 2021 Exam held in online mode from 1st to 8th April 2021. 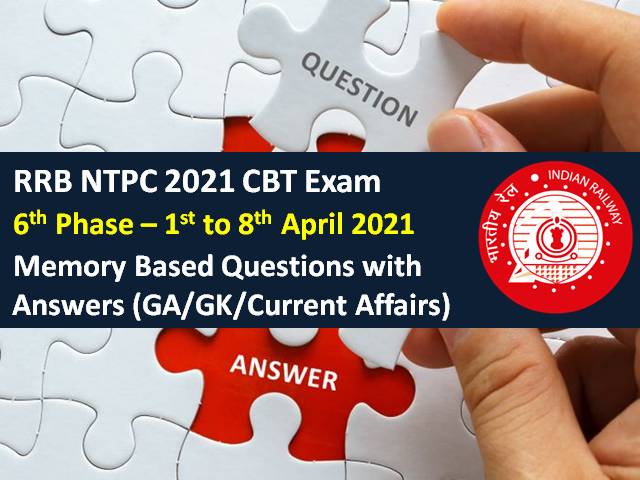 RRB NTPC 2021 Exam Memory Based Questions with Answers (Phase-6): RRB NTPC 2021 Phase-6 CBT Exam has been commenced from 1st April and will be conducted till 8th April 2021 for around 6 lakh candidates across different exam centres in India. Computer Based Test (CBT) is being conducted for the recruitment of RRB Non-Technical Popular Categories (NTPC) 35281 Vacancies (Graduate & Under-Graduate Posts) in two shifts.

Answer: June 2014 - 'Namami Gange Programme', is an Integrated Conservation Mission, approved as 'Flagship Programme' by the Union Government in June 2014 with budget outlay of Rs. 20,000 Crore to accomplish the twin objectives of effective abatement of pollution, conservation and rejuvenation of National River Ganga.

2. Which dynasty of Delhi Sultanate ruled for the longest period?

Answer: Tugalaq dynasty ruled for the longest period of time in Delhi Sultanate.

3. Which seaport name has been changed to Deendayal Port?

Answer: Kandla Port was renamed as Deendayal Port Trust under the India port act of 1908.

4. Who was the 4th President of India?

5. Which amendment is called the Mini Constitution of India?

Answer: 42nd amendment, 1976: It was called as Mini constitution of India and was brought during national emergency.

6. Which of the following tributaries is not related to Krishna River? Tungabhadra, Koyna, Musi

Answer: The indigenously-developed aircraft has been manufactured at the Hindustan Aeronautics Limited (HAL) and designed by the Aeronautical Development Agency (ADA) for the Indian Air Force and the Indian Navy. Tejas is a fully-weaponised light fighter with a single engine.

8. Which of the following is wrong Headquarters? Gatt-Geneva, WHO-Geneva, Interpol-Lyon France

9. Saprophyte is an organism:

Answer: An organism, especially a fungus or bacterium, that grows on and derives its nourishment from dead or decaying organic matter.

10. Prandhan Mantri Jandhan Yojana is for whom?

Answer: The Pradhan Mantri Jan Dhan Yojana Account Eligibility Criteria entails that the applicant should be from the age group 18-59 years.

11. Who was the first RBI governor?
Answer: Sir Osborne Smith

12. Who was the world champion in Boxing for 6 times?
Answer: Mary Kom

14. Who is the Chief Minister of Goa?
Answer: Pramod Sawant

15. Who was the first director of NITI Aayog?
Answer: Narendra Modi

16. Why did Gandhiji roll back the non-cooperation movement?
Answer: Chauri Chaura incident

17. What is the full form of NABARD?
Answer: National Bank for Agriculture and Rural Development

18. Who got the Nobel Prize in the youngest of age?
Answer: Malala Yousafzai

19. Origin of Species is written by:

20. Which is the closest star to the earth?